Want to live in a condo steps away from the legendary Imperial theatre? Participate in the Grand Prize Draw

How would you like to live in the heart of Montreal’s Quartier des spectacles, just steps away from the Imperial theatre?

By participating in the Fondation du CHUM’s Grand Prize Draw to support the CHUM Research Centre, you could win a fabulous condo located in a brand-new building near the Imperial theatre on de Bleury Street in Montreal. 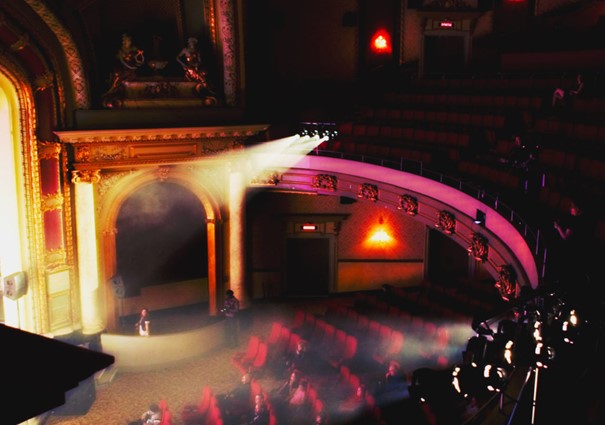 Win a condo near the Imperial theatre

The grand prize of the Fondation du CHUM Grand Prize Draw is a new 383 sq. ft. urban condo located on the 16th floor of the Imperia Condominiums project, a boldly designed 22-story mixed-use building that will include 221 residential units.

The condo prize comes with several brand-name appliances and pieces of furniture built-in, all chosen to make the most of the available space.

The winner will also receive up to $7,000 to cover most of the costs associated with the condo (welcome taxes, notary fees, insurance, condo fees, etc.) for the first 2 years.

Last but not least, the winner will receive a generous welcome package to help them make the most of life in Montreal. The package includes an electric bike, a coffee maker and a variety of gift cards.

The Imperial theatre first opened on April 25, 1913. Designed by architect Albert E. Westover in the super-palace cinema style that was popular at the time, the building retains its original character despite nearly a hundred years in operation. The Renaissance-inspired design includes frescoes above the entrance hall signed by William Eckhart, and the decor was created by Tognarelli and Voight.

Today, the Imperial is one of the last charming, old-fashioned theatres left in the Montreal area. It has just one auditorium that can be used for movies, shows and other events. Its majestic decor includes a balcony, rosettes on the ceiling and red seats, remnants of the traditional style and old opulence of bygone days.

The theatre is a powerful symbol of Montreal’s cultural heritage, which definitely deserves its place of pride in Montreal’s modernizing Quartier des spectacles.

In its April 25, 1913 edition, La Presse called the Imperial “a metropolitan theatre that New York would be proud to have.”

A century later, the creators of the Imperia Condominiums project, Quebecor, DevMcGill and Omnia, dared to imagine a typically New York-style complex that would be the envy of major cities across the world.

Imperia Condominiums distinguishes itself from other housing complexes by its parking for bicycles rather than cars, among other notable qualities—the building will have a yoga room and a fully-equipped fitness room, and the 21st and 22nd floors will be dedicated to a delightful urban chalet where residents can relax and socialize. It will also feature a rooftop terrace with a breathtaking view of Mount Royal and the downtown core. Residents can unwind in a 4-season hot tub and make delicious meals on the barbecue—everything needed to organize unforgettable get-togethers.

Last but not least, food lovers and connoisseurs will be thrilled to know that there will be a bistro-style gourmet restaurant located on the second floor of the building. The restaurant will be directly connected to the Imperial theatre, so Imperia Condominiums residents will have front row seats to films, concerts and other events.

You can also purchase tickets at participating Metro grocery stores throughout the province or on the BMR website, BMR.co.

If you get tickets from one of our partners, don’t forget to use your registration code to get a personalized electronic ticket so that you can be contacted more easily if you win the condo or one of our other fabulous prizes.

Not sure whether to try your luck? Don’t forget that participating in the Fondation du CHUM Grand Prize Draw doesn’t just give you the chance to win great prizes like a condo near the Imperial theatre—it’s also a way to support the CHUM Research Centre.

Buy your tickets today and support a world-class research centre whose work benefits everyone in Quebec as well as people elsewhere in the world.