Montreal, September 19, 2017 – Claude Meunier, volunteer spokesperson for the Fondation du Centre hospitalier de l’Université de Montréal (CHUM), proudly announced the arrival of an exciting new member on the Fondation’s team: Montreal Canadiens #92, JONATHAN DROUIN. The 22-year-old hockey player has pledged to make a personal donation of half a million dollars, thus $50,000 annually for the next 10 years. He intends to invest fully and dedicate as much time as possible to the Fondation du CHUM, CHUM and its patients.

Moreover, starting in 2018, he will actively participate in several of the Fondation’s major fundraising activities and he hopes to raise another 5 million dollars through them. In particular, we will see him at the annual golf tournaments, at a ball hockey match involving other NHL players and cultural and business personalities, and at several other activities.

Jonathan Drouin said he is very happy to get involved with the Fondation as he is extremely sensitive to the health issues that Quebec families are facing.

The Fondation du CHUM and Jonathan Drouin definitely have a few things in common, among others: determination, teamwork and the desire to excel. They also play an important role in promoting Montreal and Quebec internationally. So the meeting between the two occurred naturally. “I am very happy to make a donation to the Fondation, but also to set the tone for the next generation.” He is convinced that many young adult men and women might also follow suit. “I am also making it my mission to talk about the Fondation du CHUM’s mission and values with my network of contacts to encourage others to get involved and understand the importance and role of CHUM in the community,” he explained.

Jonathan Drouin was quick to extend a warm welcome to his captain, Max Pacioretty, and Mr Marc Bergevin, General Manager of the Montreal Canadiens and members of his inner circle, his parents, his girlfriend and his agent, Allan Walsh. “Their support is very important to me.”

Mr. Marc Tremblay, Fondation du CHUM chairman and principal vice-president of Québécor, described the new donor as a young man with a heart of gold and solid values. “We are overjoyed that Jonathan has joined the Fondation team. We strongly hope that his involvement has a ripple effect on the next generation,” he said.

CHUM and CHU Sainte-Justine president and CEO Dr. Fabrice Brunet said, “We are deeply touched by Jonathan Drouin’s exceptional gesture. This confidence in our mission is a shot in the arm of courage and determination for all those aspiring to a healthy future. This act of generosity is all the more important because on Sunday the CHUM inaugurated its new worldcalibre hospital in the service of the Quebec population. Beyond this donation and his generosity, Jonathan personifies a new generation of philanthropists who want to make a difference. His image as a champion is certainly going to inspire our teams, who are already recognized for their excellence.”

Luce Moreau, President and CEO of the Fondation du CHUM, talked about the fundamental role of the Fondation in realizing the new CHUM’s mission. She announced that, to date, the Fondation’s major campaign has fundraised over $180 million. That’s more than 60% of the initial objective of $300 million. She enthusiastically welcomed the newcomer and his dynamic and refreshing commitment. “Having Jonathan on our team will give the Fondation a younger image! His idea to recruit young people from the next generation is wonderful. We will have an even bigger impact, with all generations working together,” she said.

Also, Jonathan Drouin’s contribution will be associated for the next 15 years to the agora in the Centre de recherche du CHUM (CRCHUM), a pleasant and friendly space full of light where researchers, clinicians and students gather together to work and discuss science.

To see pictures of the press conference, click here. 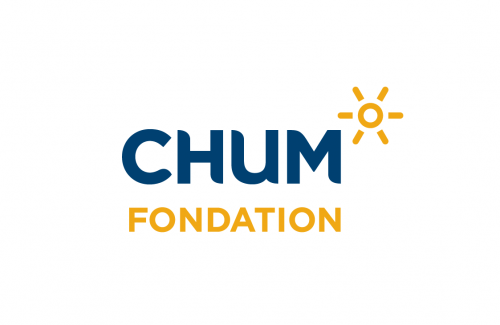 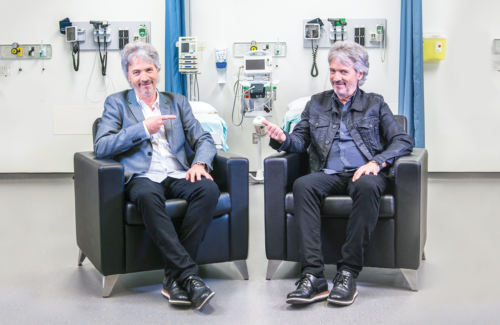